The H.E. Myrick Conservation Center is the headquarters of the Brandywine Red Clay Alliance (BRC). A private property open to the public during daylight hours, the 318-acre Center is located in Pocopson Township along Route 842, six miles west of West Chester and three miles east of Unionville.

The Center began in 1981 as a gift from Horatio Myrick; it was originally 212 acres which included farmland, woodland, wetland and meadows. Since relocating here, BRC has acquired an additional 116 acres bringing the Center to its present size. Today, this is the site not only of BRC’s offices but also provides the outdoor classroom for our environmental education programs. In addition, many public education programs take place on our grounds throughout the year.

The property contains a Quaker barn which dates to the beginning of the 19th century and contains several additions to the original building. It also has a rare wood silo from the early 1900s, the only such silo remaining intact in Chester County. Also on the property is a springhouse dating to the Revolutionary War period.

Presently much of the property is used for agriculture under a conservation plan that dates to 1981. Crops include sunflowers, sorghum, corn, soybeans, wheat, alfalfa, and hay. The small streams which begin on the property are protected with tree plantings to reduce overland runoff and filter out contaminants. The Myrick Center contains trails for walking and horseback riding as well as areas for picnicking, bird watching and enjoying the natural environment. Download our trail map.

Things to Know Before Your Visit

In 2013, most of the Myrick Center was put into a conservation easement, preserving the land in perpetuity. 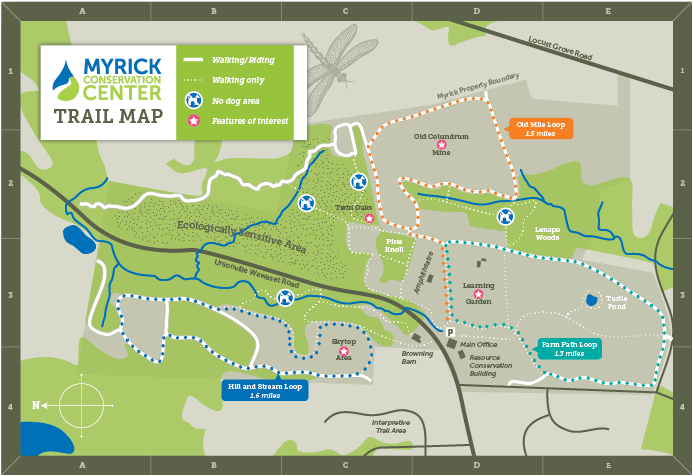